Tolkien’s Oxford – a city of literature.

Visiting Oxford is like a tour around Tolkien’s imagination – if you wander around this marvellous city, you can imagine where Tolkien found an inspiration to write “The Lord of The Rings” and “The Hobbit”. It’s an unusual place, full of academic atmosphere and history, full of magic places. If you arrive here, you feel this literary atmosphere, because of which Oxford is so famous. Another famous writers based in Oxford are: C.S.Lewis, Phillip Pullman or Lewis Carroll. It’s very easy to book a walking tour around the city centre, when a professional guide will guide you to the places connected with those authors. 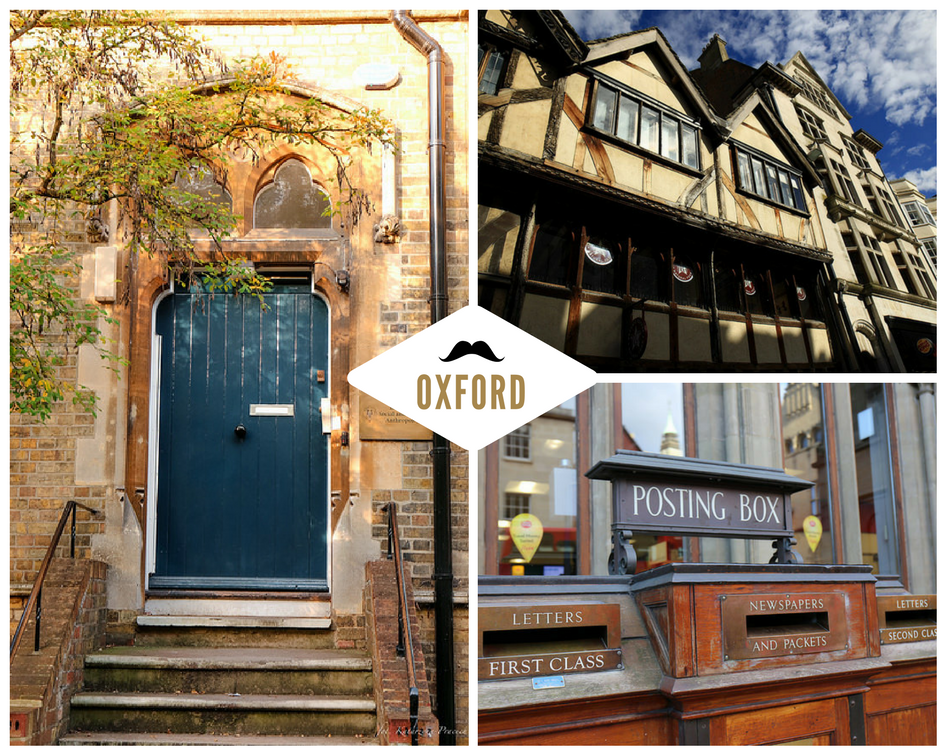 The easiest way to get to Oxford.

Just book a flight to London, there are so many cheap airways, f.e. Ryanair or Wizzair. You have to get to London Victoria Station and switch to Megabus. If you book ticket about two months before, you can buy a ticket from London to Oxford for 1 GBP! Please, remember that Megabus does not have to have a logo on the bus – they sometimes use other coaches, so ask a driver if it’s the right bus.
Stop in Oxford:  Oxford Bus Station (Gloucester Green Bus Stn, George St, Oxford OX1 2BU). If you would like to stay in Oxfordshire for a longer, you can get from this station f.e. to Stratford – Upon – Avon or any other villages in Cotswolds. There is also a bus straight to Oxford from Luton Airport – check National Express coaches. 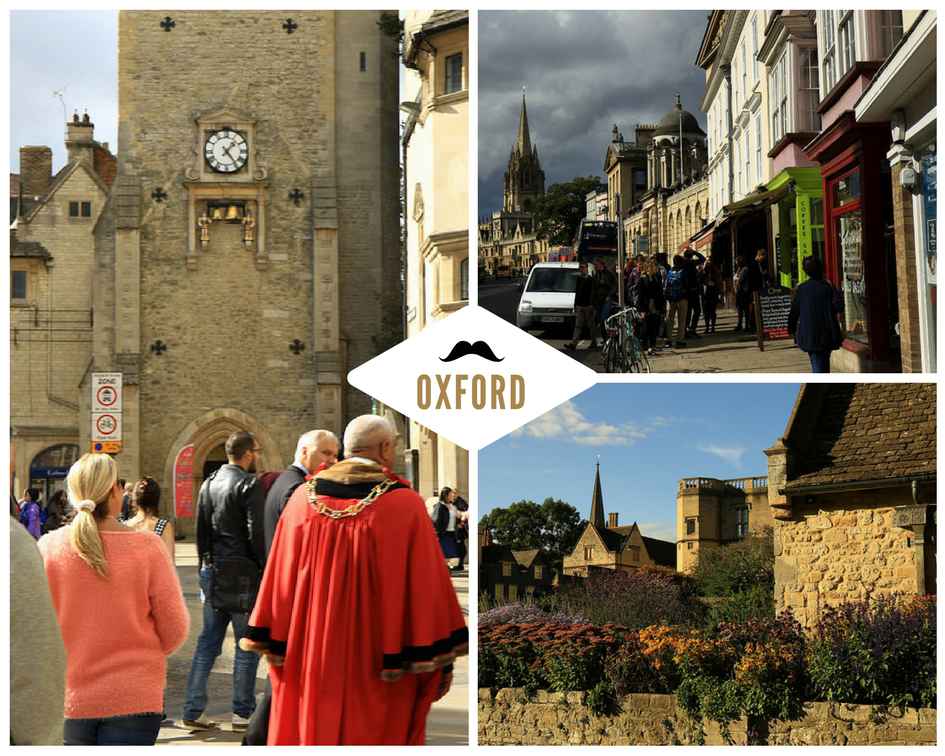 I would like to invite you for a short walk, which will give you a glimpse of Oxford and will inspire you to visit this beautiful place. I love Oxford and I will be back not only once for sure! My favourite season is Autumn, Oxford is full of incredible colours, the city is so mysterious and picturesque at that time. 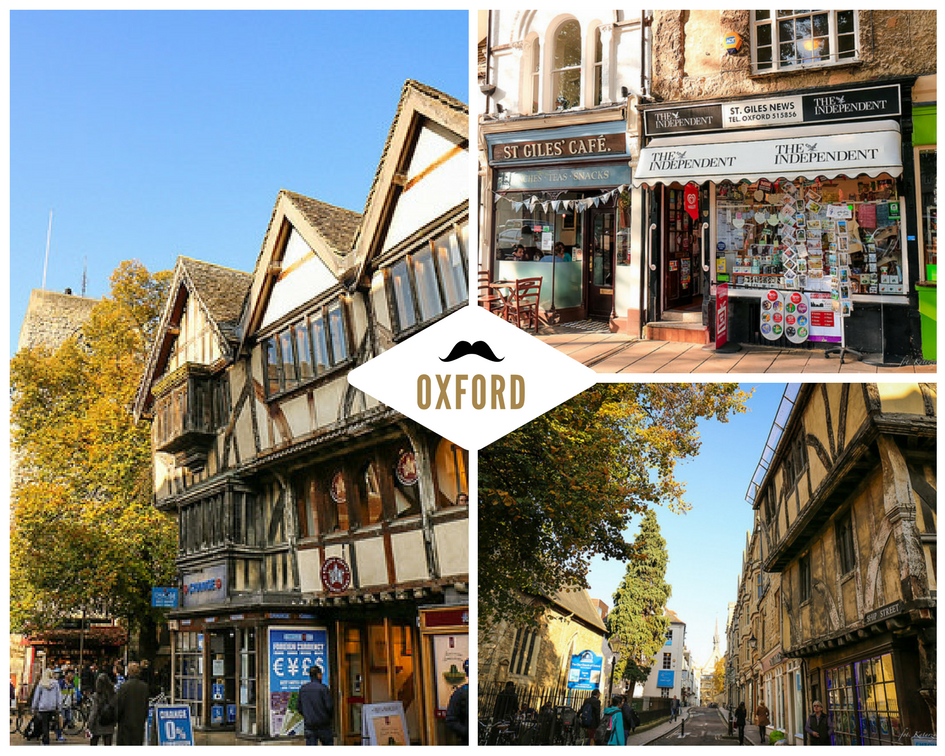 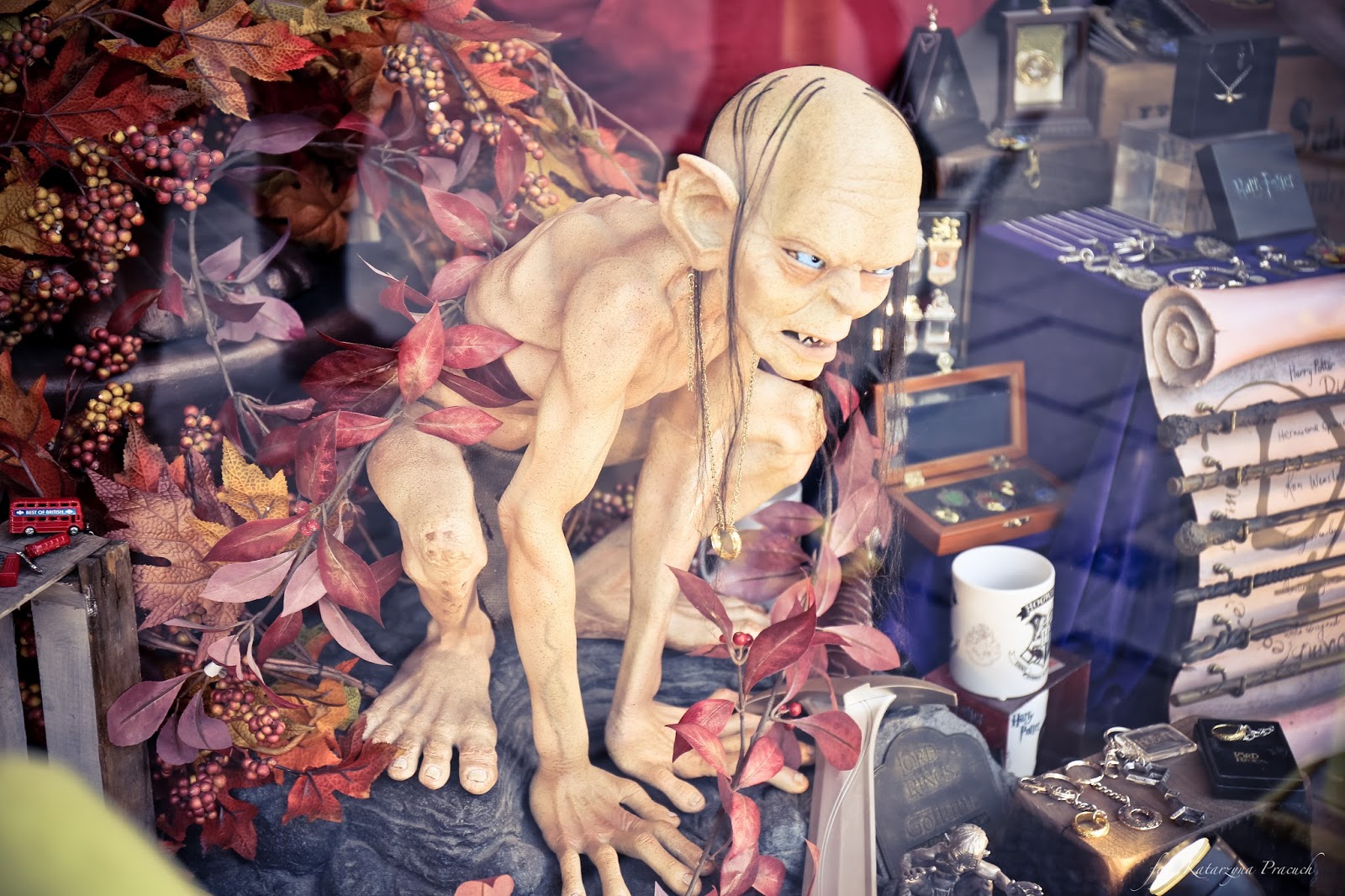 This post is about J.R.R. Tolkien’s places in Oxford, so let’s start! I will show you some places where you can feel his soul and influence. I won’t tell you about Tolkien’s biography, if you are reading this post, you probably know a bit about one of the most famous writers of our times. Oxford is a place where Tolkien worked on in a university for many years and where he wrote his most famous books. You can see Tolkien’s impact in many places: pubs, restaurants, bookshops, museums & exhibitions.

Some facts about J.R.R.Tolkien:
1. He was a teacher of literatury in Oxford University (Pembroke College & Merton College).
2. He was one of The Inklings – an informal literary group.
3. He was born in South Africa, then he moved to Birmingham and finally – he moved to Oxford. His addresses in Oxford were:
21 Merton St, 76 Sandfield Rd, 99 Hollywell St, 3 Manor Rd. 20 i 22 Northmoor Rd and 50 St John’s St.
4. The love of his life was Edith, he met her when he was 16 years old. 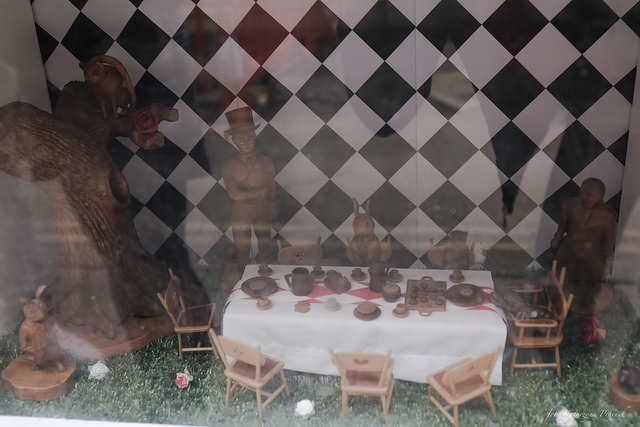 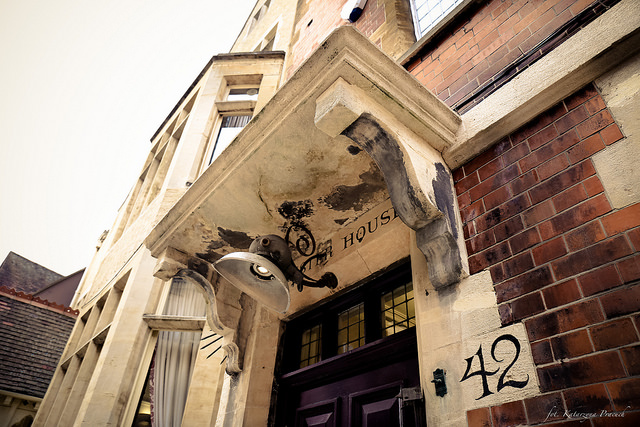 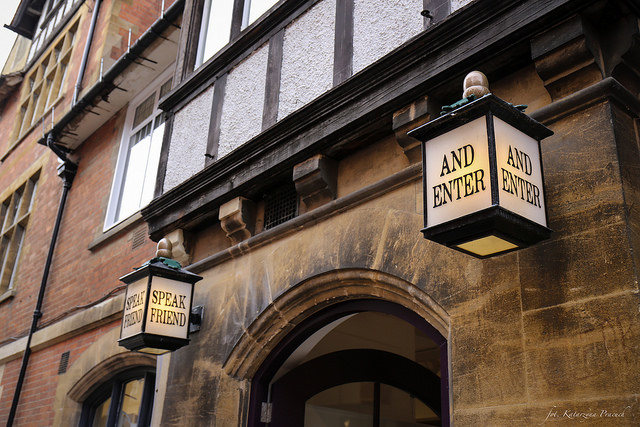 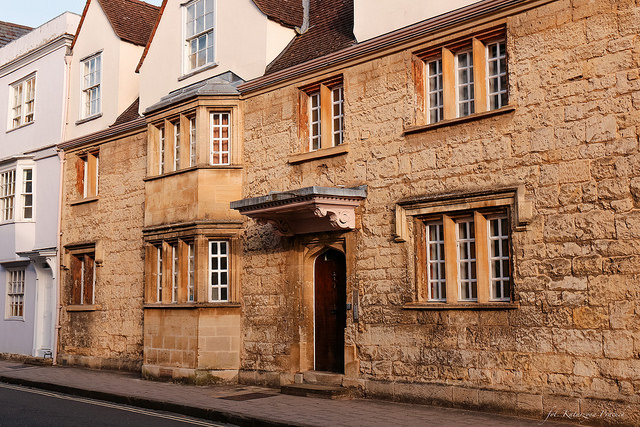 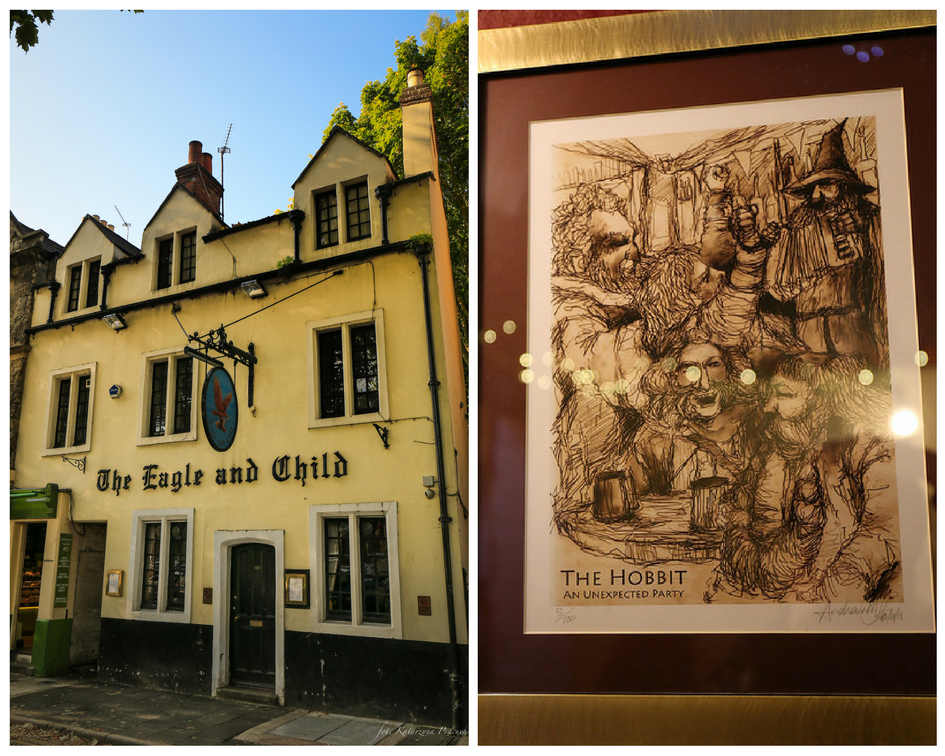 It’s probably the most famous connected with Tolkien. It’s one of the five most popular historic pubs in Oxford (from 1650) – it was a place of meeting of informal literary group “The Inklings”. They had meetings regularly, they were inspiring each other during long conversations, they shared their ideas while drinking beer. 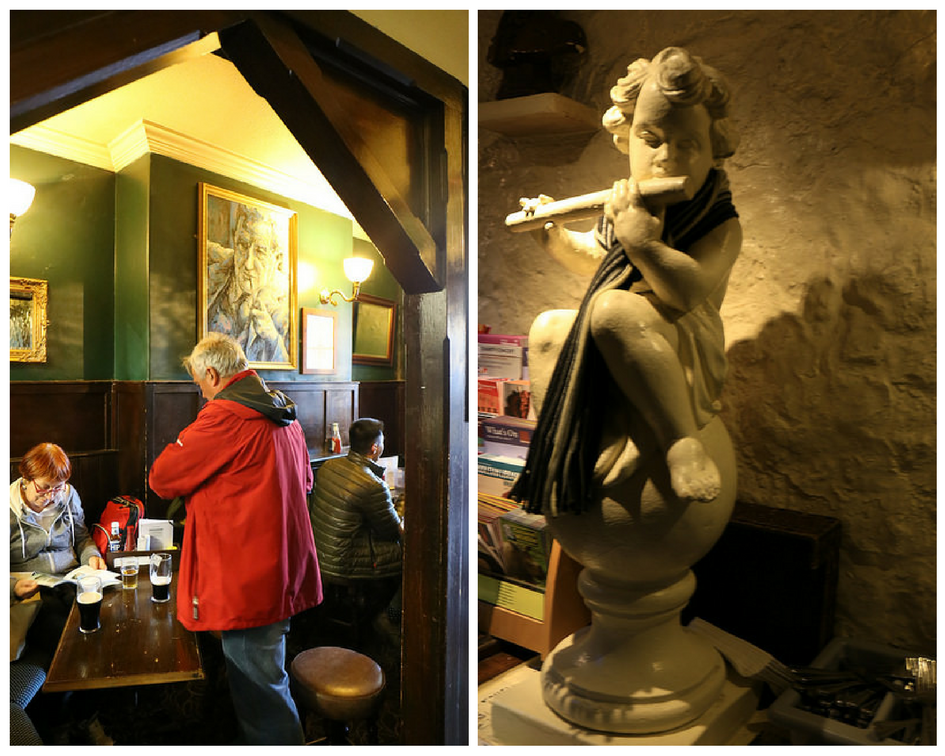 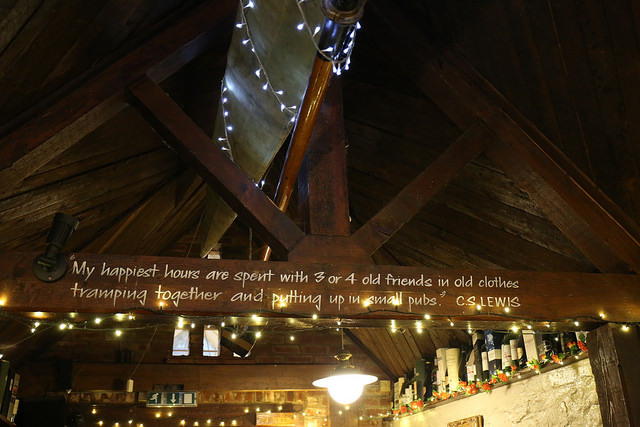 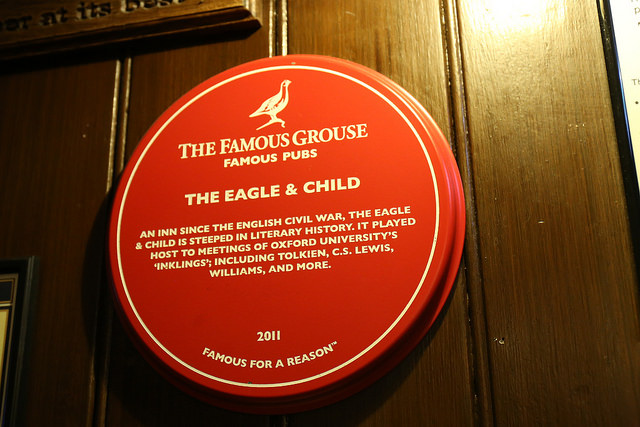 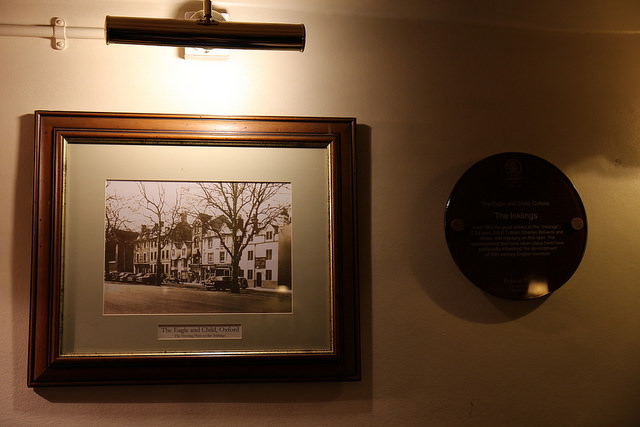 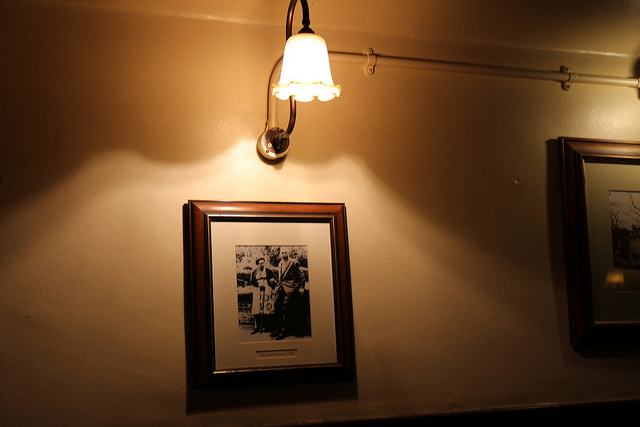 Regular meetings started in 1933 until 1962, Tolkien stopped attending meetings in 1950. This place is full of souvernirs after the group. The Eagle and Child is a very famous pub, on Fridays it’s full, so I recommend visiting Monday – Thursday and Sunday. It’s not so cheap (especially for me, earning in PLN), but if you really want to visit place where Tolkien’s ghost is still visible, you really need to come here and you won’t be disappointed!

Pembroke Square, St Aldates, OX1 1DW
It’s a place where Tolkien worked as a professor for 20 years (1925 – 1945). Pembroke College has the most beaufitul university chapel in Oxford. 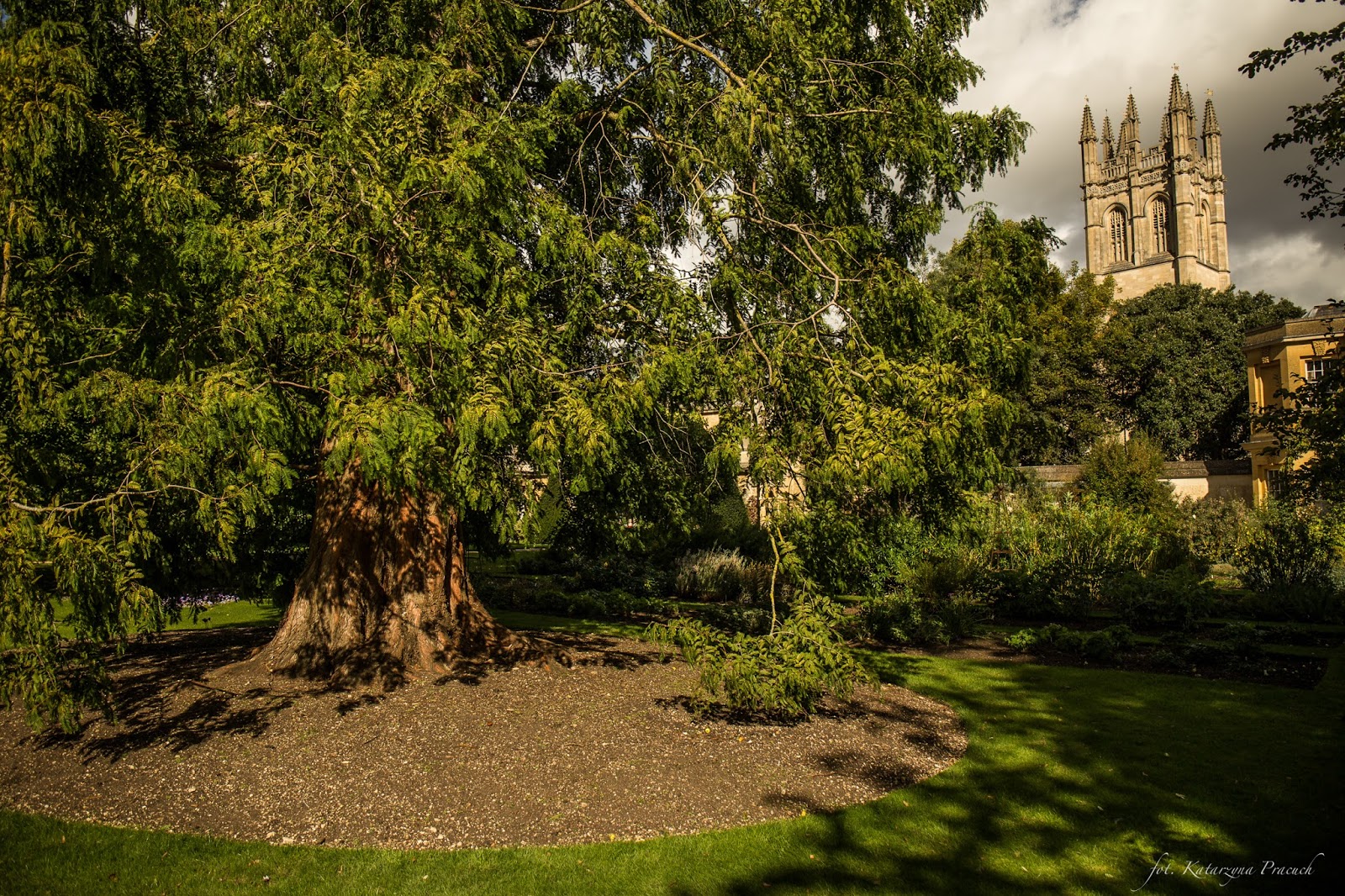 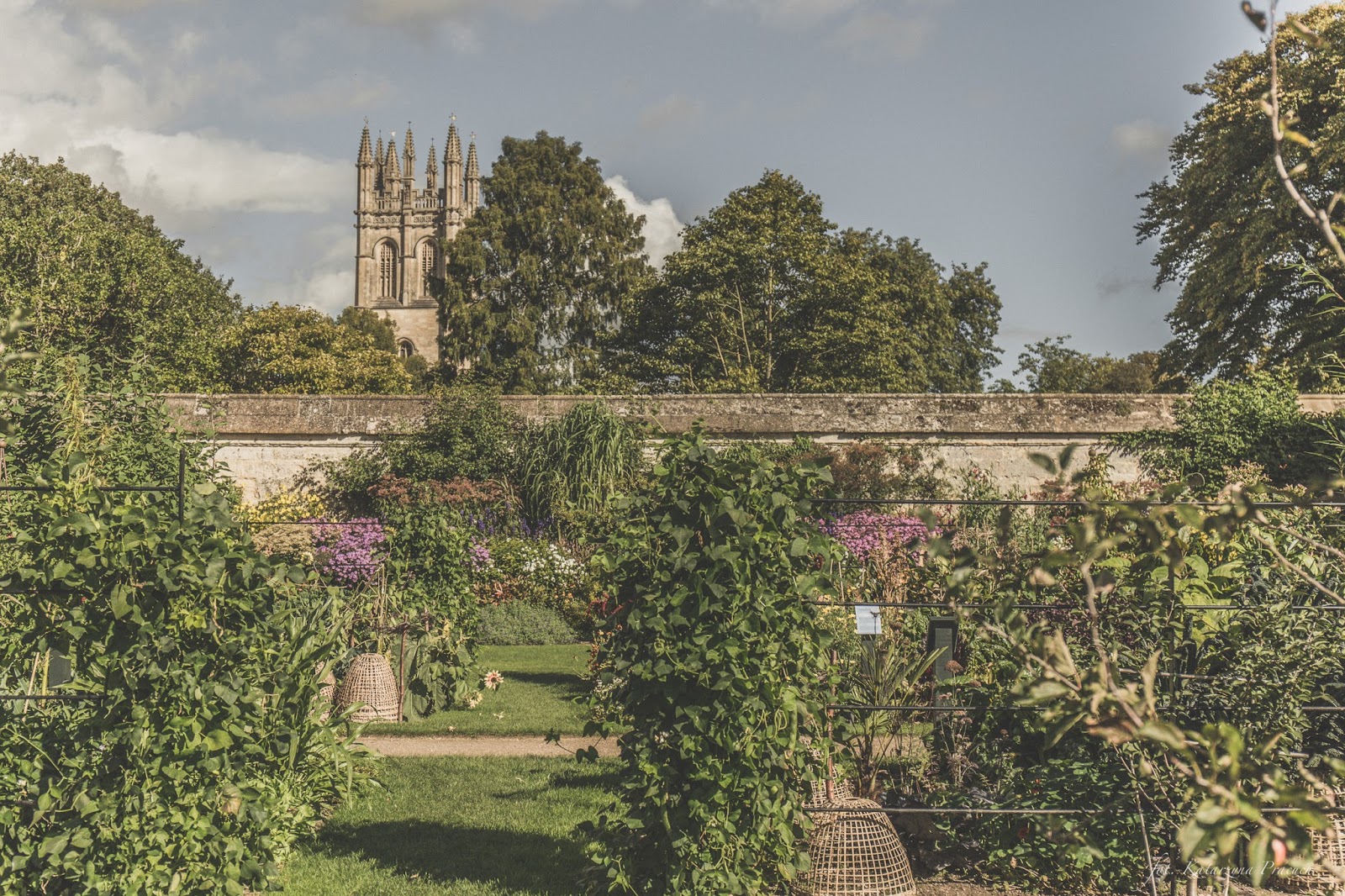 Merton Street, OX1 4JD
After Pembroke, Tolkien was a professor of literature in Merton College for the next 14 years.
It’s one of the oldest colleges in United Kingdom – it’s from XIIIth Century. It houses one of the oldest biblioteques in Britain.

It’s the most photographed building in Oxford. It’s not surprising, the architecture is incredible!
I have spent a beautiful morning just staring at Radcliffe Camera and eating breakfast. Radcliffe Camera was built between 1737 and 1749. Now there’s a library, but it’s not public. Only members of the university have this wonderful opportunity to come inside. Radcliffe Camera was an inspiration for Sauron’s Sanctuary in “The Lord of The Rings”. 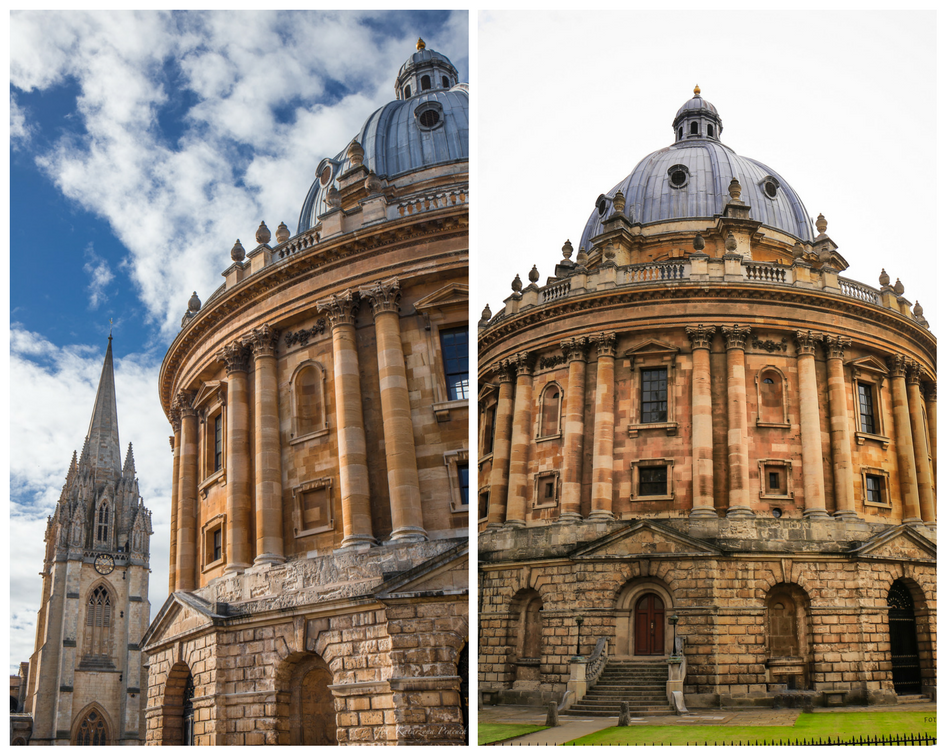 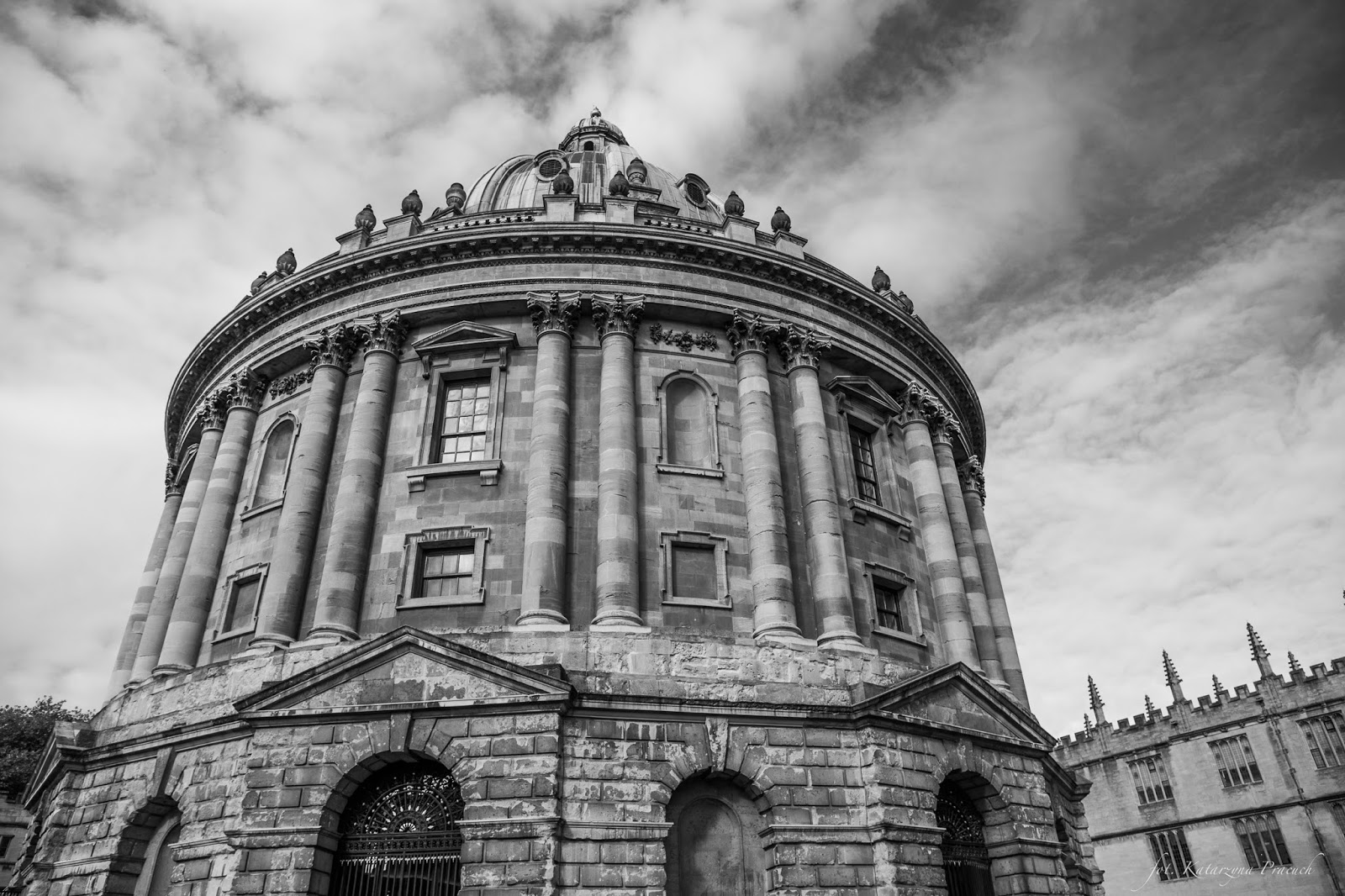 It’s the most important biblioteque in Oxford, one of the European’s oldest libraries. Books are collected here from 1602, until now it includes more than 11 millions of manuscripts. There are Tolkien’s manuscripts and graphics for “Lord of The Rings”, but those materials are available only for chosen.
There is an opportunity to sighsteeing Duke Humfrey’s Library. 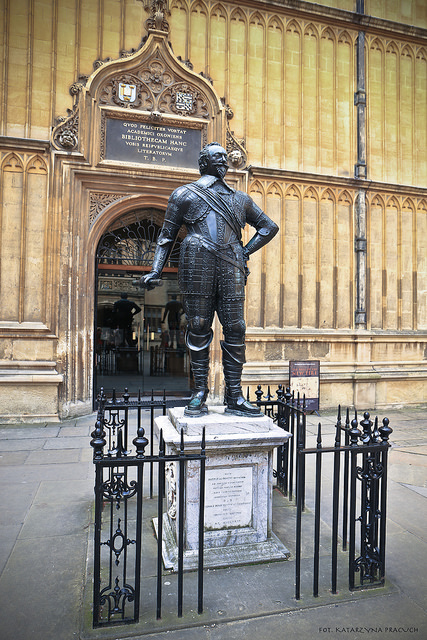 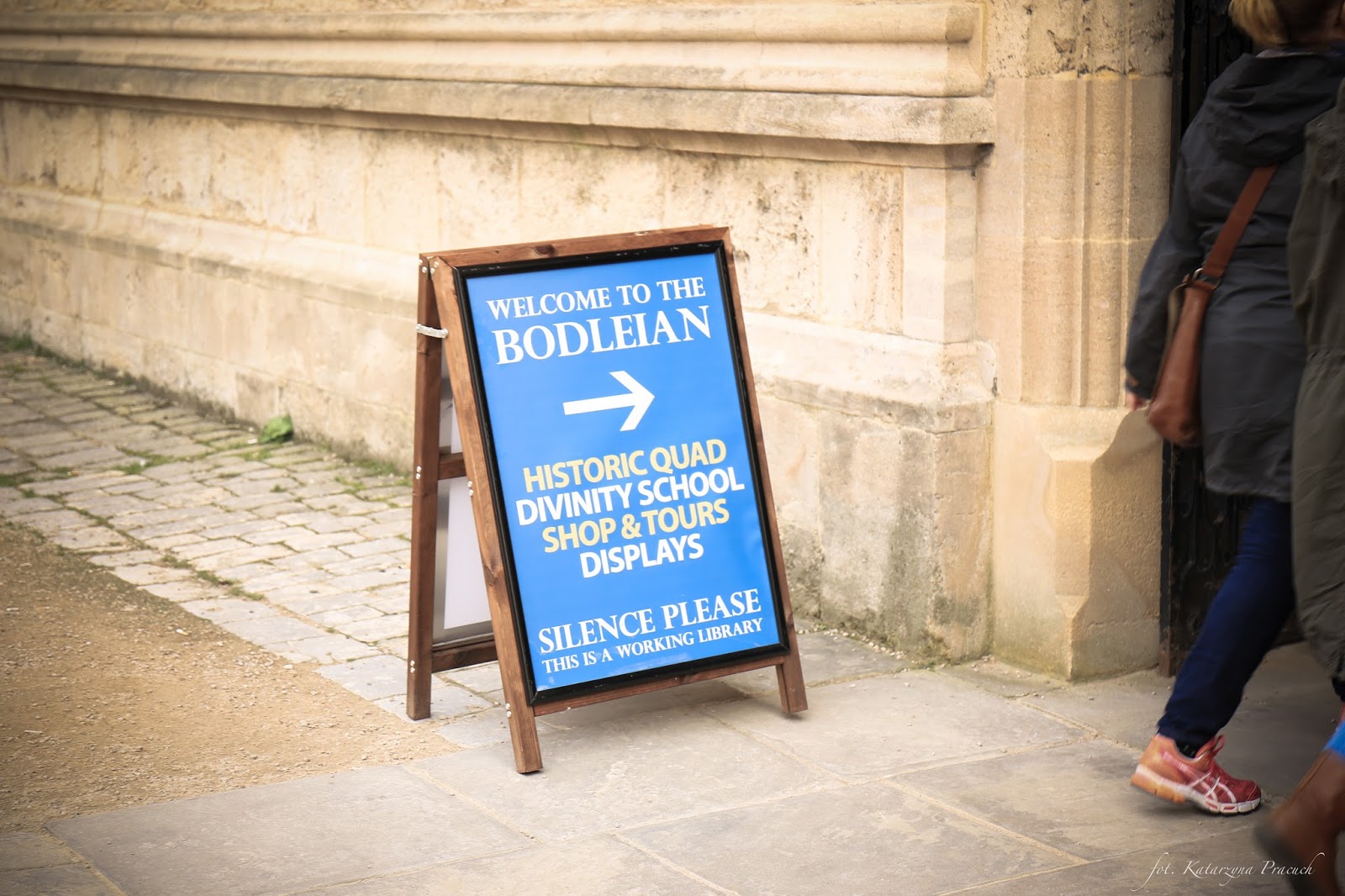 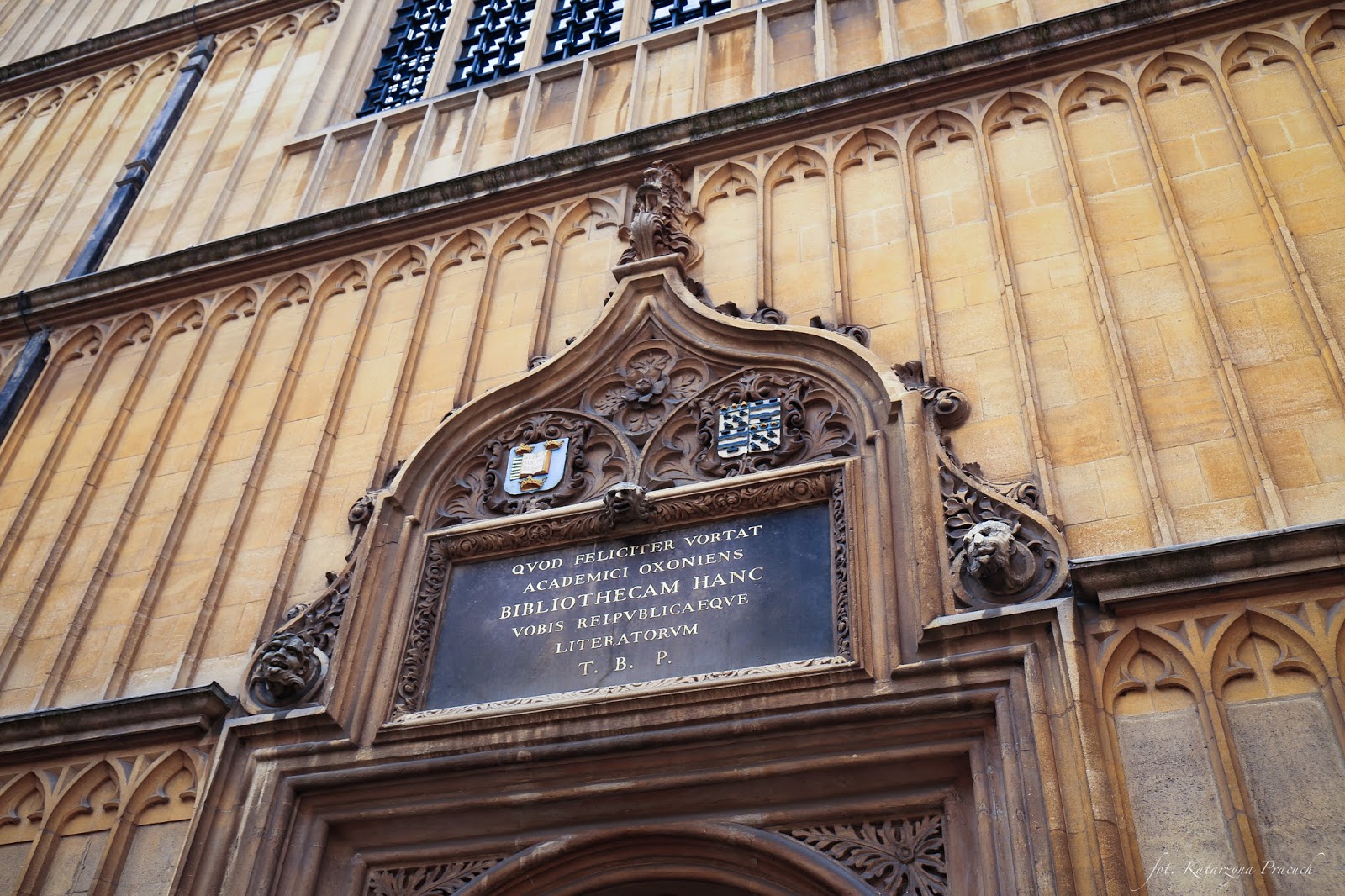 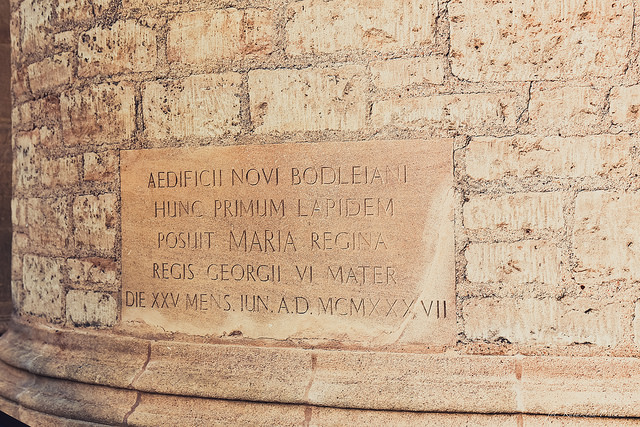 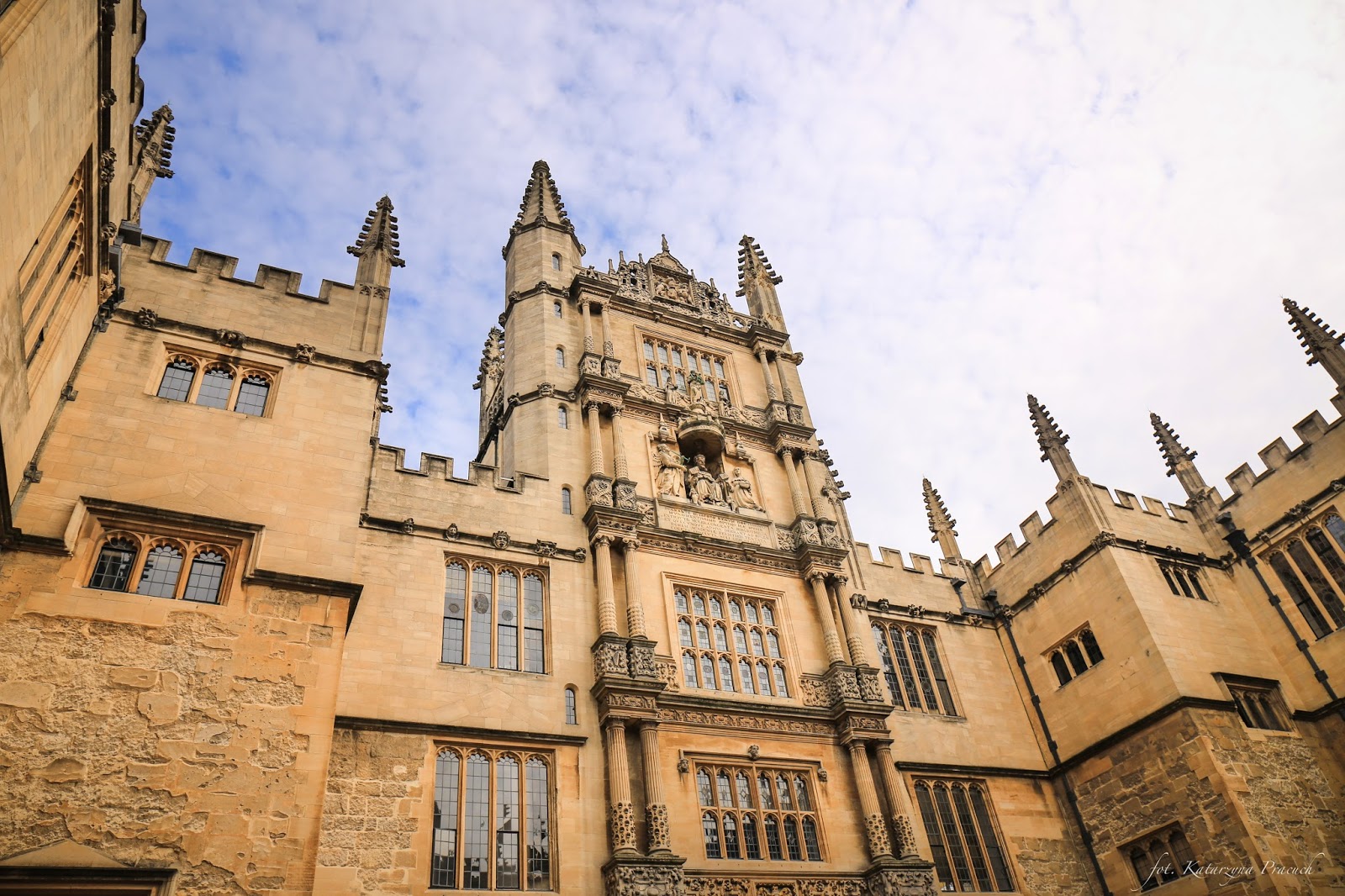 Another place connected with Tolkien – our Master spent here so much time looking for an inspiration. It is a must to see this place – it’s a perfect idea for beautiful walk and having a rest in the city, especially during the Summer and Autumn. There was a Tolkien’s favourite tree but it was cut in 2014 after 215 of existence and we won’t have an opportunity to admire it. Now we know what was an inspiration for the Ents from “The Lord of The Rings”.

Tolkien, C.S.Lewis and Hugo Dyson trail of literature disossions and ideas. If you want to get here, you have to buy a ticket to Magdalen College. I didn’t had a chance to visit this old and famous college (it was closed for visitors), but I promise I will show you Magdalen College next time!

If you want to pay a tribute to this legendary author, you need to visit his grave on Wolvercote Cemetery. It’s a resting place of Tolkien and his wife. I was expexting a place with bunch of flowers, big monument etc. It’s just a simple grave of J.R.R. and his wife, Edith – only with few plasti flowers and small dragon figures, maybe a celtic cross too. 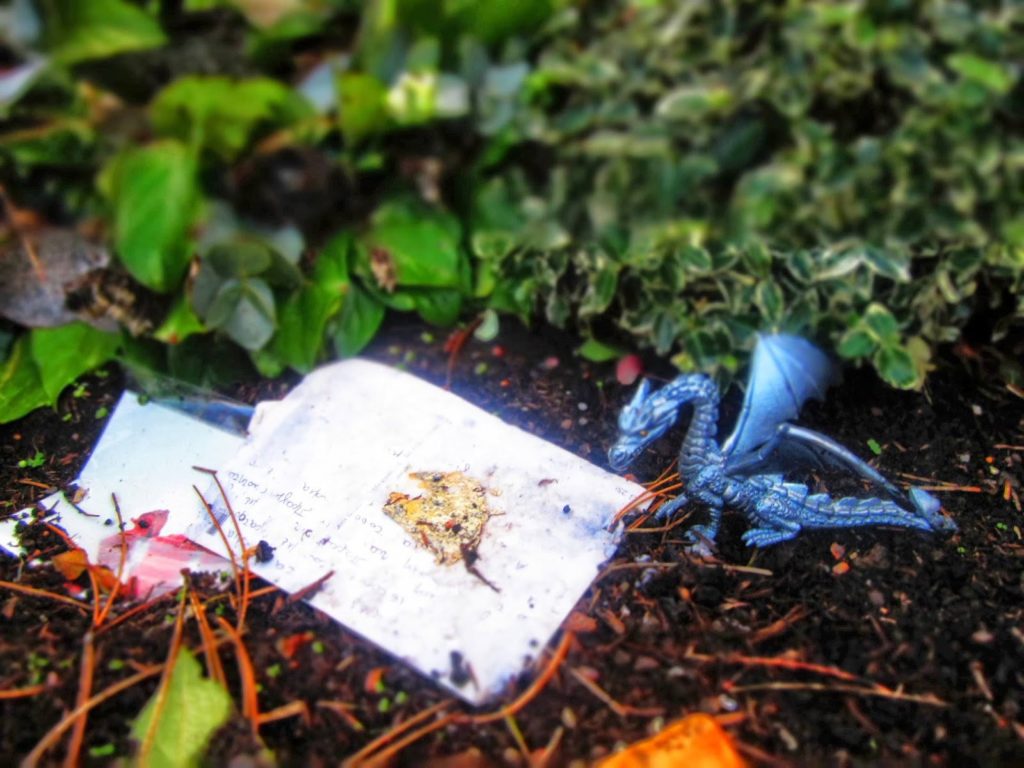 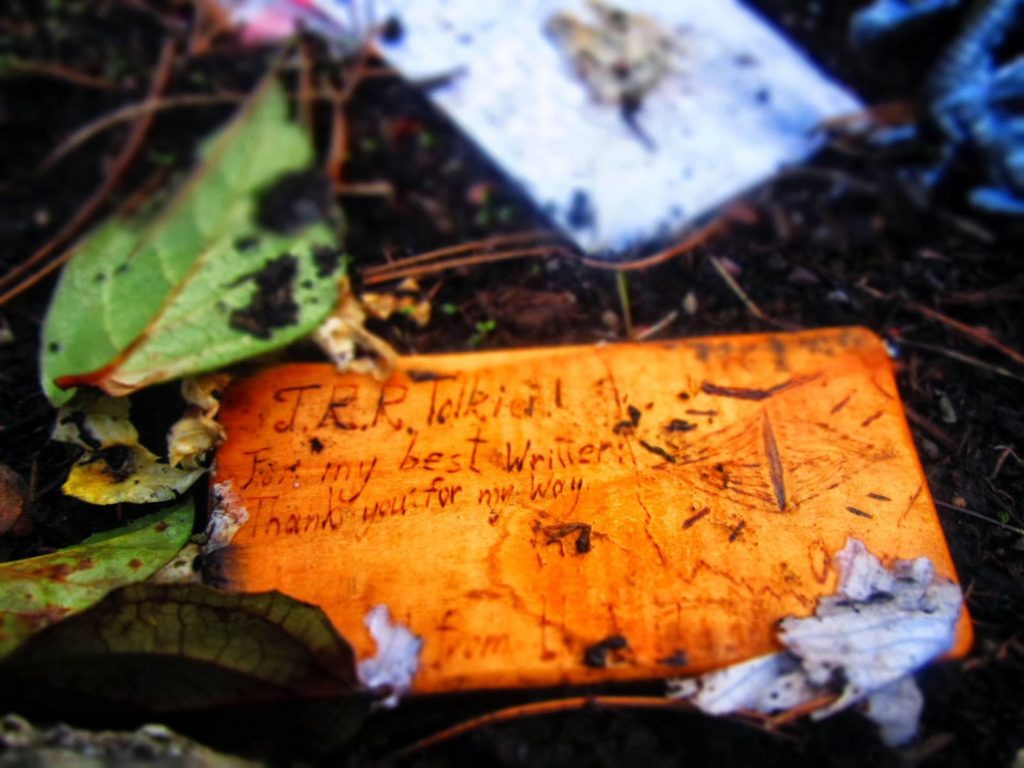 If you want to know more about the places connected with “The Narnia Chronicles” author, C.S.Lewis, here are some useful informations:

For such kind of walking tour you have to reserve 2 hous and it’s only outside sightseeing. Tour starts at Magdalen College during the hours when college is open for visitors (between 2 p.m. and 6:15 p.m. everyday).

Here are some places you will visit during the walking tour:

1. Blackwell’s Bookshop on Broad Street.
2. White Horse + The King’s Arms pub (on Hollywell Street) + The Mitre – two “The Inklings” pub, they were meeting there during the WWII.

You will probably be very, very hungry after visiting all those places in Oxford.

Where to eat in Oxford?

I want to recommend you some nice places to eat or simply have a rest with a cup of delicious coffee.

1. Thaikhun Oxford –restaurant with Thai food. Very interesting interior, a really nice plae in the centre of Oxford. Close to the coach station. 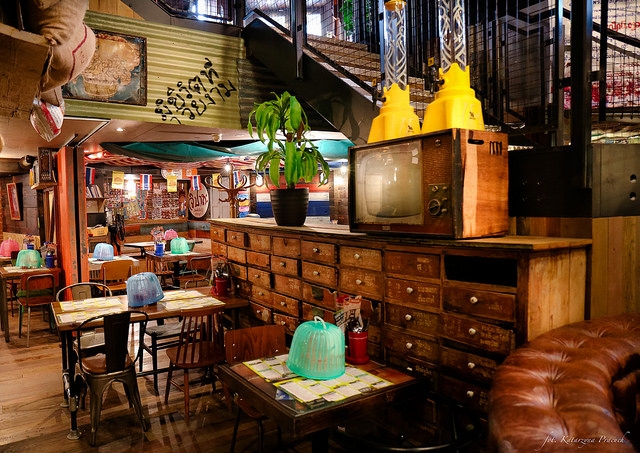 2. The Turtle Bay – Jamaican food, the most energetic staff I’ve ever met! If you want to eat something really, really spicy – it’s for you!

3.  Vaults And Garden Cafe – what a wonderful place for breakfast and lunch break. Such a picturesque setting – it’s next to Radcliffe Camera and University Church! Just grab a breakfast set, it’s very, very tasty! 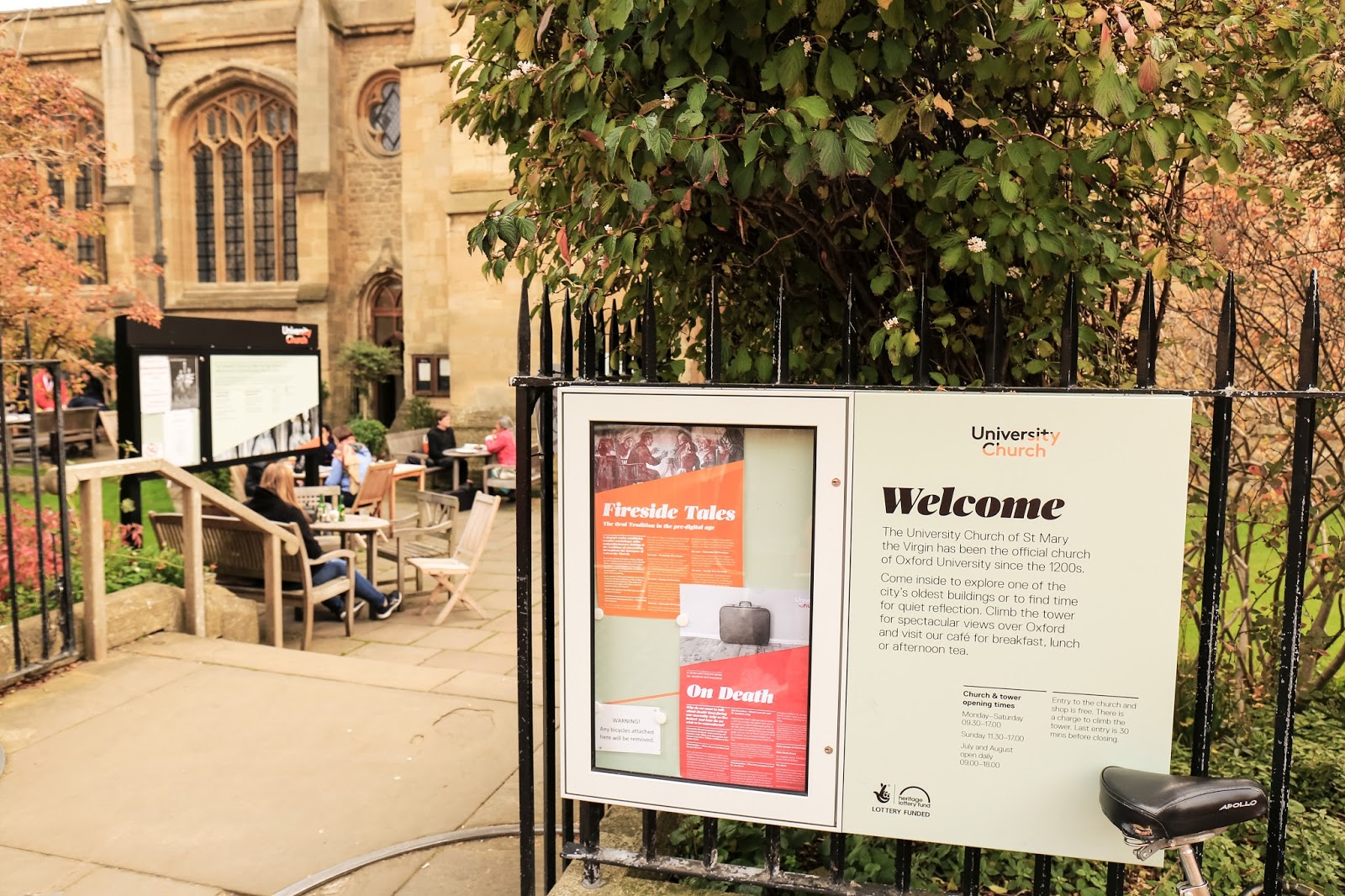 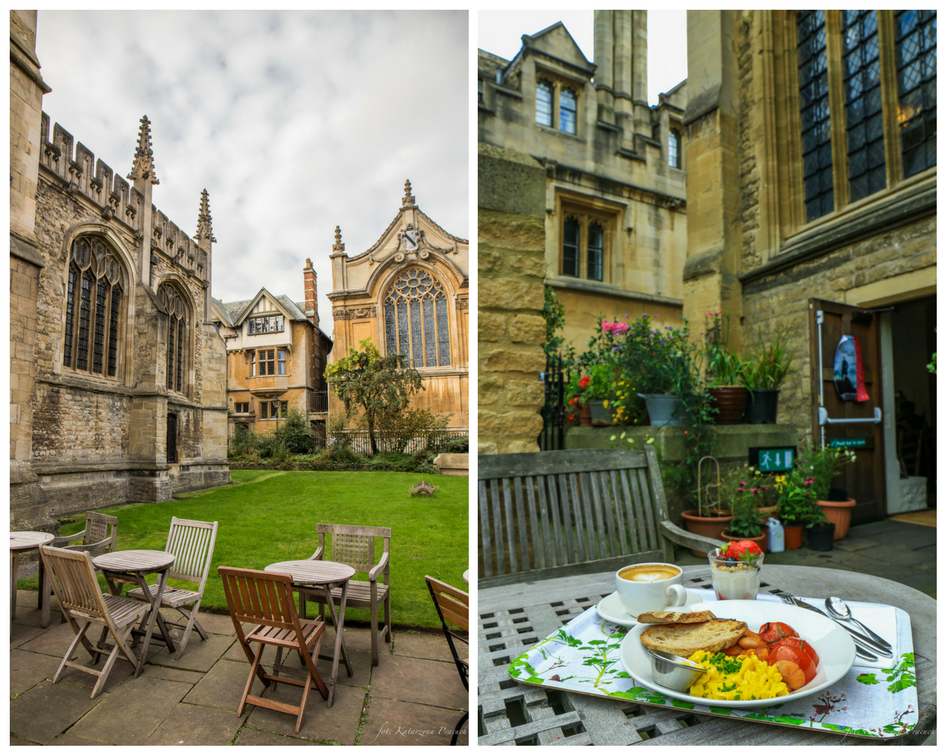 4. The Grand Cafe – it’s on the place of the oldest cafe in Oxford. 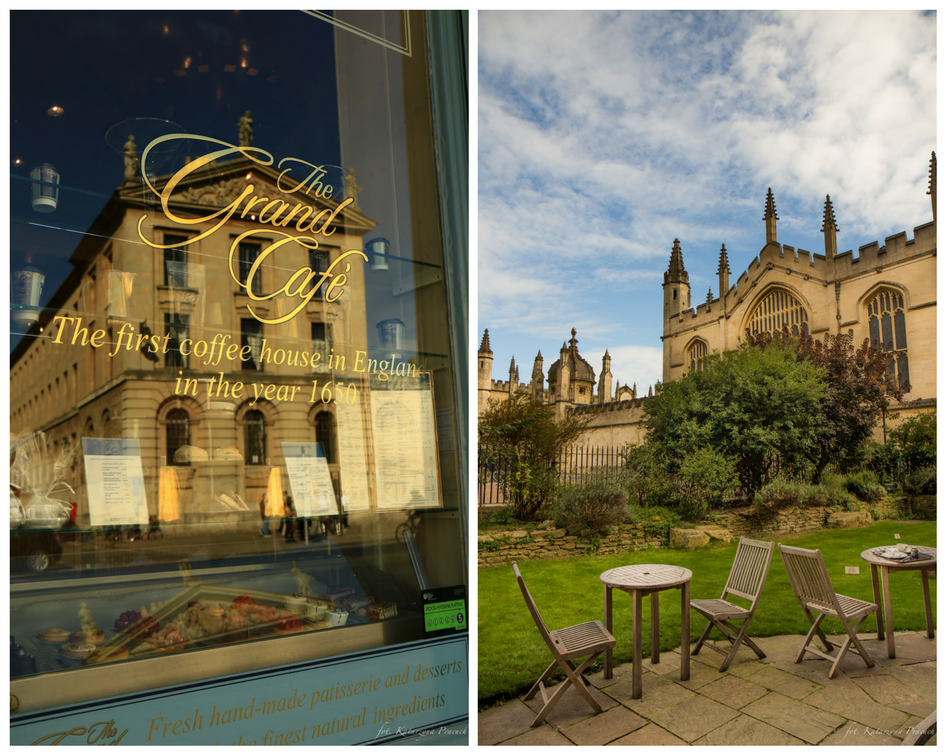 5. Cafe Loco – cafe with perfect cakes, coffee and beautiful view. Right after Christ Churh sightseeing and wandering around The Christ Church Meadows, it’s the best place for having a rest and sweet feast. Look at this “Alice in Wonderland” wallpaper!

This BBC documentary might be really interesting for you 🙂